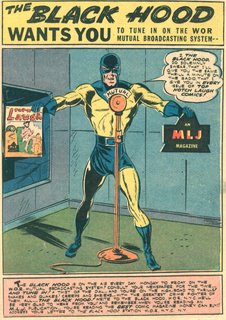 We all know that SUPERMAN was a successful radio show and Batman was not (although he appeared on Supes' show). Other super heroes that did NOT appear on radio included Green Lantern, Captain America, Plastic Man and Captain Marvel along with most other ones come to think of it. Oddly, among those who DID have their own radio series included BLUE BEETLE, THE GREEN LAMA and, apparently, as I found out today, MLJ's BLACK HOOD. Here's a 1943 ad promoting the Mutual Network series. A quick glance at John Dunning's radio reference guide shows that he fought crime over the airwaves in a 15 minute serialized format for a little over six monhs before fading away into the ether. He was played by one Scott Douglas.
Posted by Booksteve at 8:14 PM