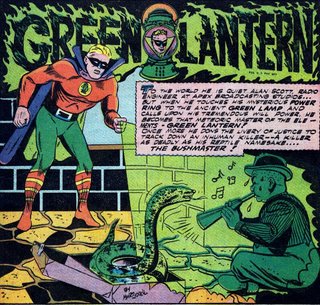 Since I've spent much of the past week reading stories of the Golden Age Green Lantern from the forties through the present (and even extolling the character's virtues here at the blog!), I feel as though I would be remiss if I neglected to note the passing yesterday of the character's originator, Mart Nodell. Mister Nodell was a delightful comic convention guest for many years and I had the pleasure to meet him twice in the late eighties/early nineties. One of my early favorite comic books was GREEN LANTERN (the Hal Jordan version) and I always enjoyed the guest appearances by the "Earth 2" GL, Alan Scott. At the time, I had no idea that the character had such a rich history behind it. Later, Green Lantern was the reason I shelled out big bucks (when I HAD big bucks!) for my first Golden Age comics. According to legend, Mister Nodell asked All American editor Sheldon Mayer what would get him a regular gig drawing for the company and was told that super guys were hot. On his way home, he saw a subway worker swinging a green lantern and history was born. Batman co-creator Bill Finger helped develop the character and over the years the series would feature scripts by Gardner Fox, Alfred (THE STARS MY DESTINATION) Bester and some of the best comics writers of the period. Nodell would handle the art off and on, sometimes also drawing FLASH stories. Later Alex Toth would draw some stories but Paul Reinman and Irwin Hasen eventually became the main artists on the strip. The character was so popular that he appeared in his own mag as well as in ALL AMERICAN COMICS, COMIC CAVALCADE and ALL STAR COMICS (with the JSA!). Although he disappeared for a few years in the fifties, the revived version would see his return as well as grow into a considerable franchise of its own. Just this week Green Lantern appeared in the new JUSTICE SOCIETY OF AMERICA book. Not bad for a spur of the moment inspiration. Thank you, Mister Nodell. You did a good job!
Posted by Booksteve at 7:08 AM