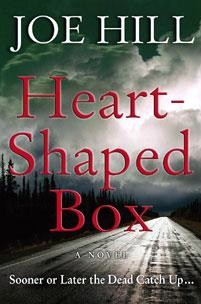 I kinda feel like I'm coming late to this party even though the book is still several months away from publication. What book, you ask? HEART-SHAPED BOX by Joe Hill. If you saw the plug in USA TODAY more than a month ago, HEART-SHAPED BOX is generating enough buzz to be considered a notable book of 2007 before it even comes out! Today, I got my hands on an advance copy and I'm anxiously devouring it already. The book won me over immediately by opening with a quote from Alan Moore! HEART-SHAPED BOX introduces us to a collector (like most of us) who collects weird and wacky things (like drawings of Disney's seven dwarfs by serial killer John Wayne Gacy). In the beginning of the book, he buys a real ghost online from one of the Ebay knockoffs. I'm still early in the book but let's just say this turns out to NOT be such a good idea. Obviously, I can't write a full review at this time but I'm enjoying it immensely and wanted to give you all a heads up. Hill's writing style is unpretentious and his imagination fertile. His background in comics and horror fiction (he downplays it for obvious reasons but he's Stephen King's son) serves him well for the pop-goth setting of the novel. Here's a link to Mr. Hill's website: joe hill fiction :: home Even though I'm not finished with it yet, I don't get the impression that it's going to be the blockbuster USA TODAY touted but I can't help but think pop culture fans and horror buffs will find HEART-SHAPED BOX enjoyable. Watch for it in February, 2007!
Posted by Booksteve at 8:21 PM