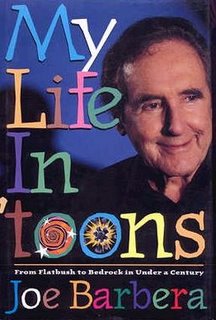 The late Joe Barbera, along with partner Bill Hanna, created an incredible legacy of entertaining animation that rarely gets enough credit due to the simple fact that Hanna-Barbera was NOT Disney or Warner Brothers. That’s just it, though. From the earliest collaborations on TOM AND JERRY to the stiflingly limited animation of the late seventies, Hanna-Barbera cartoons had a unique look and feel all their own, characterized by voice acting that, dare I say it, may well have been better than that of the bigger studios! As radio died off, many of the best of its voice actors turned to animation with Alan Reed, Daws Butler, Arnold Stang and even Mel Blanc taking up long-term residence in HB cartoons. Sometimes it seemed that Butler (along with Don Messick) was handling about 90 percent of the company’s output! The other thing that characterized Hanna-Barbera cartoons was their music and constant, inventive sound effects.
As a child, some of my earliest memories are 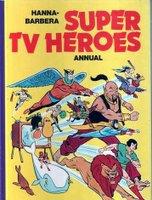 of watching HUCKLEBERRY HOUND. Later, I developed a genuine fondness for H-B’s super-hero and fantasy cartoons such as THE IMPOSSIBLES, SPACE GHOST and BIRDMAN. The studio’s output spread into so many directions that quality suffered, perhaps inevitably, but as time went on, characters such as YOGI BEAR, QUICK-DRAW McGRAW and especially SCOOBY-DOO became icons every bit as beloved as MICKEY MOUSE or BUGS BUNNY. With animation having changed so much as computers developed, Joe Barbera was perhaps a man out of his time. His place in that time and in legend, though, are secure. Thanks, Joe! We here at the Library take special delight in the Hanna-Barbera books we have on hand and appreciate your life-long dedication to the fans!
Posted by Booksteve at 10:01 PM