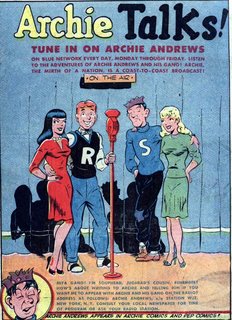 Today we have a vintage ad for ARCHIE on radio! This has more meaning for me than some ads of this type as my wife and I have become friendly with three of the surviving actors over the last half decade or so and, in fact, appeared in two re-creations of original ARCHIE scripts. Bob Hastings wasn't the original ARCHIE but he took over the role as he returned home from World War II and made it his own. Hal Stone played Jughead throughout the run and Rosemary Rice appeared as Betty. All three of these great radio performers have become regulars at the annual Cincinnati Old-Time Radio and Nostalgia Convention. Back when Bob was the only one coming, I was priviliged to co-star as Jughead in two on-stage episodes in different years, one of which featured my lovely wife as Betty, the other having her as Veronica (so who needs to choose? I have 'em both!). It was a fun series distinctly in the ALDRICH FAMILY mode and all of the performers have great memories of doing it. In fact, if you ever get the chance to see Bob and Hal just standing together arguing and sniping lovingly at each other, you'll enjoy it more than most any show you could pay for anywhere! As far as this picture goes, though, what's the deal with Jug having his arm around Betty (whom is notably bosomier than Ronnie!) when we all know he hates girls!!!
Posted by Booksteve at 7:46 PM