Ed Brubaker and the Winter Soldier 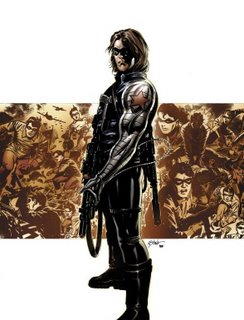 It used to be said that to be really and truly, once and for all dead in the Marvel Universe was to be "Uncle Ben dead" or "Bucky dead" as those were the only two characters who had (in spite of various dreams, flashbacks, robots, etc.) never been revived. I noted recently that even an alternate world Uncle Ben returned! Still, nothing prepared me for Bucky’s big comeback…which I finally got around to reading in the trades. What surprised me most is that it all works!
Ed Brubaker is one of those types of comics writers who have begun to infuse the industry in recent years. Rather then just "Damn the torpedos! Full speed ahead!" they respect what has gone before but don’t let it stand in the way of a good storyline. After years of creative stagnation in the mainstream comics field, the development of these guys (Geoff Johns is another) has become a joy to watch! I’ll admit I’m still trepidatious but they have gotten my attention!
According to Ed, as a collector it always irked him that Bucky died "off-camera." That you couldn’t actually buy the issue with Bucky’s death because, in fact, it was an early example of ret-con! So if all we have is Cap’s version…maybe his partner wasn’t any more dead than Cap himself! Enter the writer’s way of looking at an idea and twisting it. Bucky survived that buzz bomb explosion but was rescued by the Soviets in pretty bad shape. Ed ret-conned that Bucky had logically (?) been a trained assassin and was probably about twenty when they fought Baron Zemo. As such, the Russians nursed him back to health and brainwashed him, taking advantage of and enhancing his covert training. Then they froze him, thawing him out every few years when they had a nasty job for him to do. 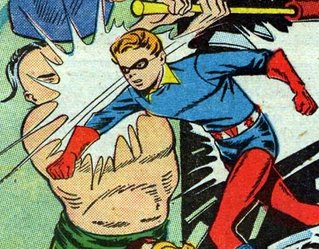 Thus he aged much more slowly than normal. Somehow, it all actually made sense.
Besides Cap, the "Winter Soldier" storyline that ran last year featured superb storytelling all around, re-presenting Sharon Carter, Nick Fury, the Red Skull, and even Union Jack and Spitfire(!), all old acquaintances familiar and yet made new at long last. After years of false hopes and evil twins, Captain America finally learns the truth about his former partner a little at a time and in a moment of crisis, they even team up again! As with most comics these days, however, there can be no happy ending. Still, a good story well-told is a joy unto itself and I’ve found far too few of those in recent years’ comics. Mr. Brubaker, I salute you, sir! Thanks for caring enough to do right by Captain America in these confusing times in which we find ourselves. I guess even Bucky isn’t "Bucky dead" anymore. Here's a link to Ed Brubaker's site: edbrubaker.com.
Posted by Booksteve at 7:14 PM