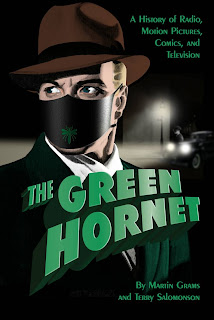 One of my favorite new things is the Internet radio station offered by RADIO ONCE MORE (http://www.radiooncemore.com/) which last night debuted rare surviving partial episodes of THE SHADOW along with the announcement that prolific author Martin Grams will be doing a book concentrating on THE SHADOW radio series. Mr. Grams returns to the "airwaves" tomorrow evening for an in-depth discussion of his soon-to-be-released book on THE GREEN HORNET (co-authored with Terry Salomonson), fortuitously timed to be available just before the upcoming Seth Rogan GH movie. When Neal Ellis, Terry Salomonson, et al are not doing their live call-in OTR discussions, the station presents a wonderful selection of radio episodes. Since last evening alone, I've heard JACK BENNY, OUR MISS BROOKS, FIBBER MCGEE AND MOLLY, an AMOS 'N' ANDY guest-starring Peter Lorre and a violent episode of Joel McCrea's TALES OF THE TEXAS RANGERS!Check out RADIO ONCE MORE if you're already an OTR buff or if you just want some good, old-fashioned entertainment like they REALLY don't make anymore!
Posted by Booksteve at 10:24 PM