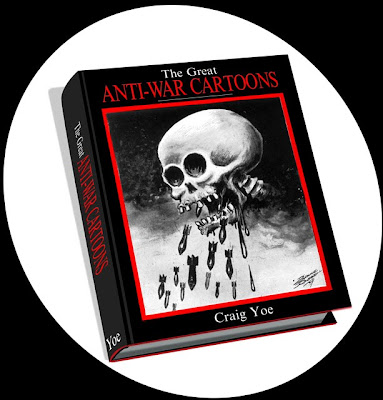 THE GREAT ANTI-WAR CARTOONS by Craig Yoe is one of the books I assisted with this past summer and I think it's a very important book. Craig has compiled and assembled an impressive and long overdue volume showcasing more than 200 editorial cartoons and other illustrations on the horrors of war. Over the decades (and in some cases centuries) these largely forgotten works have time and again both influenced and reflected the thoughts of the citizens of the world. Ron Cobb, Robert Crumb and Geoffery Moss appear alongside such old-timers as "Ding" Darling, Will Dyson and James Montgomery Flagg and such old, old, old-timers as Honoré Daumier (1808-1879) and David Vinckboons (1576-1633). The Introduction to the volume is supplied appropriately by recent Nobel Peace Prize Winner,Dr. Muhammad Yunus.

The art seen here is not pretty but then no one ever really said art had to be pretty. Art is supposed to make you think and this art, often done as transitory illustrations that probably ended up lining bird cages the next day, made people think in its day. It made people look at different aspects and different perspectives and from different directions at something that has always been with us and sadly still is...war. It even made one laugh with its often grim and blacker than black humor. This work, from all points on the political spectrum, deserves to be resurrected from the ashes both for its historical importance and its still relevant comments on the world.

Since I did some behind the scenes volunteer work on this book, I'm not claiming in any way that this is an unbiased review but if you need one, here's one: http://www.mania.com/great-antiwar-cartoons-review_article_119496.html

THE GREAT ANTI-WAR CARTOONS can be ordered from all the usual sources and can be previewed here: http://yoe.com/antiwar/

If you're on FACEBOOK, check out my growing fan page for THE GREAT ANTI-WAR CARTOONS.
For those of you not familiar with author Craig Yoe, here's his bio: Craig Yoe is the author and designer of over 25 books on popular culture including the Arf books on comics history (Fantgraphics), The Art of Mickey Mouse with an introduction by John Updike (Hyperion), The Art of Barbie (Workman), and many more. Yoe is the former VPGM/Creative Director of The Muppets, working closely with Jim Henson. Yoe was a Vice President Art Director for Disney. He was a Consulting Creative Director of Nickelodeon. Craig is currently an Adjunct Professor of Art at Syracuse University. Yoe has won top industry awards including The Gold Medal from the Society of Illustrators, The Addy for his MTV Station I.D. and the Will Eisner Award.
If you're a blogger, please consider blogging about this just-published book. In the history of comics as well as the history of the world and its wars, it's too important to let slip through the cracks...especially now.
Posted by Booksteve at 11:39 AM