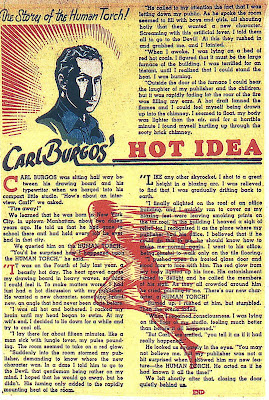 Carl Burgos was a comic book artist who did journeyman work for several decades in the industry and eventually ended up editing and/or hacking out products like the mid-sixties CAPTAIN ("Split!!") MARVEL and the grade Z Warren mag rip-offs of the 1970's. One thing, however, that can never be taken away from him is that Carl Burgos created THE HUMAN TORCH! Here, from a fiche of that character's first Golden Age issue (oddly, # 2) is the "official" version of how that came to be.
Posted by Booksteve at 12:07 PM