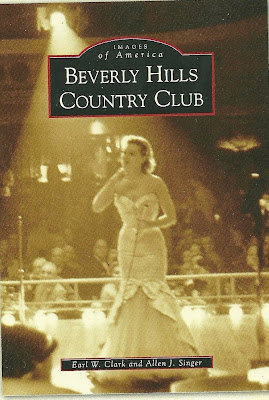 It's sad that when the average person thinks of Northern Kentucky's Beverly Hills Supper Club they recall it, if at all, as the site of one of the major fires in 20th Century history. In 1977, just days before my high school graduation,at least one of my fellow graduates lost her parents there. My own future mother-in-law had been there earlier in the evening for dinner but had left before the entertainment began and the fire started. It was a sad, sad night but its memory has supplanted the memories of the decades when the Beverly Hills was one of the great entertainment showcases of the United States.

Author and friend Allen Singer met Earl Clark who had worked in the band at the Beverly Hills during its heady days. Clark had taken hundreds of snapshots of visiting celebs big and small over the years and the two decided to share the best of these in the book seen here, due out next week. If you're from the Greater Cincinnati area, if you're a nightclub act connoisseur, if you just like rare shots of celebrities, you should check out this book!
Below is Allen's text for the video trailer he put together for YouTube, followed by the trailer.

This is a trailer I made for my newest book, Beverly Hills Country Club, being released January 25, 2010.
The club was known by more recent generations as the Beverly Hills Supper Club, in Southgate, KY, which burned down in 1977. A major tragedy, and one of the nation's worst nightclub disasters. However, the club had a long legacy, and was known as the Beverly Hills Country Club in the 1950s. This book features over 200 pictures taken behind the scenes during the 1950s. Movie stars, recording artists, Broadway actors, comedians, even dog acts. Much of the world's greatest talent played at this little club just south of Cincinnati.

Here's the list of names in the photos in order of appearance:

The first music cut came Stravinsky's Firebird symphony, the second was "Shoo Fly Pie and Apple Pan Dowdy" by June Christy. Christy appeared at Beverly Hills, and her photo is in the book. I thought it was a great song and appropriate for the trailer.

Posted by Booksteve at 1:24 PM