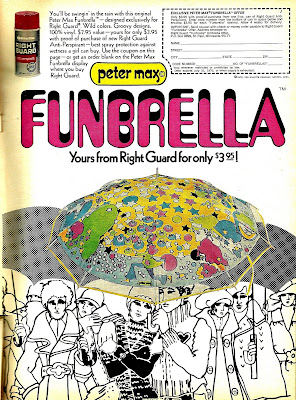 Nothing says late sixties/early seventies like Peter Max. It looked like I was going to have a chance to meet the great but controversial pop artist a few years ago when the bookstore where I was working was asked to obtain copies of his then-recent coffee table art book for an appearance at a local art gallery. I volunteered to deliver them. Negotiations broke down, however, when the gallery found out they could bypass the bookstore and get a better discount directly from the publisher. Sigh.

I the fifth grade, though, in 1969, I was the envy of my little classmates because of my Peter Max 3 ring binder! No, I don't have it anymore although I did until the great notebook purge of the early 1990's (in which the thirty or so binders I had with old comics in them got too heavy to lug around so I took out the comics and threw away the notebooks). When I ran across this colorful 1970 ad for the Peter Max FUNBRELLA recently, it all came back to me.
Posted by Booksteve at 11:01 PM