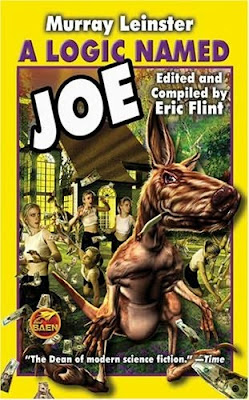 So yesterday I'm listening to an episode of one of my all-time favorite old-time radio series, X MINUS ONE. I'd never heard this particular episode before and I was increasingly amazed as it went on as to just how modern it sounded. A LOGIC NAMED JOE is ostensibly about a computer that develops sentience but it plays like a cautionary tale of the Internet and how things can get out of hand very quickly when all knowledge is at your fingertips. This was in 1955, more than 30 years before the Net as we know it even existed!

A little research showed that the oft-reprinted story by sci-fi pioneer (since 1919) Murray Leinster (originally published under his real name, Will F. Jenkins) had first come out in 1946 when most people couldn't even have imagined a computer, let alone a Worldwide Web!

One of the actors in the X MINUS ONE episode was my friend from the OTR Cons, Bob Hastings. The script they used seemed to be the same one that had been done five years earlier on an episode of DIMENSION X. I'd give you more details of the storyline but this is one of those you really should experience yourself so here's a link to the story's WIKIPEDIA page:
http://en.wikipedia.org/wiki/A_Logic_Named_Joe
At the bottom, that page links to both the original short story online as well as to not just one but BOTH radio adaptations! Give "JOE" a try and let me know what you think!
Posted by Booksteve at 9:31 AM