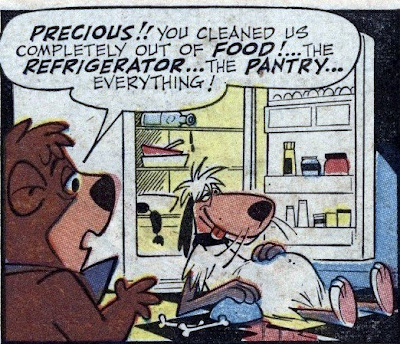 This is what it's like around here these days. Our dog Precious (now approximately 12 years old but still thinking he's a puppy...or maybe a kitty) has decided that he will--especially when we aren't looking--eat anything and everything...except dog food. I've tried all kinds of dog food in recent weeks. Even old favorites get a turned up schnozz. The cats, mind you, will eat the dog food but I think that's more because Precious also steals their tuna surprise, generally right from under thir noses between bites. For a big, klutzy dog, he can be pretty light on his feet when he sneaks down to do just that every single frickin' morning! So, when I saw this image from a 1966 YOGI BEAR newspaper strip, I could relate.
Posted by Booksteve at 9:00 AM