Pulps on To Tell the Truth


Saw this over at Kliph's CLASSIC TELEVISION SHOWBIZ (http://classicshowbiz.blogspot.com/2010/01/to-tell-truth-with-host-peggy-cass-1970.html ) this morning and just had to share. This clip from a 1970 episode of TO TELL THE TRUTH is interesting on several levels.

First of all, the guest is Tony Goodstone who compiled the seminal collection of pulp fiction, THE PULPS (seen here) which was, for many of us youngsters our first exposure to those vaunted volumes of heroes, violence and villains. 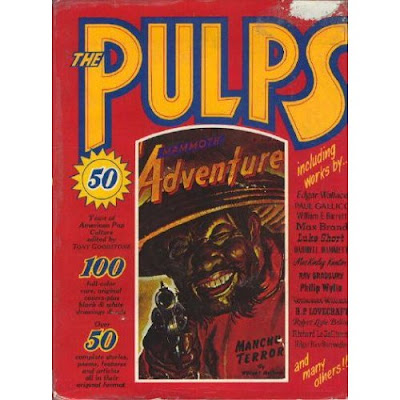 Second of all, when the three contestants come out, contestant # 1 accidentally gives an incorrect last name. In order to cover this, contestant # 2 (the REAL guy!)also gives that same incorrect name. Not to be left out, the third guy then follows suit. Host Gary Moore, however, is not amused and has the curtain closed so that the gentlemen can come out again, this time offering the correct name.

Logically, this would immediately invalidate contestant # 1. Contestant # 3 should have been equally invalidated when he quickly stated that HP Lovecraft wrote love stories!


NONE of this had an impact on the generally very intelligent game-playing panelists who, on this late episode included veteran panelists Bill Cullen and Peggy Cass along with pioneering TV newswoman Nancy Dickerson and Larry Blyden, himself the host of the revived WHAT'S MY LINE? in the early 1970's.

Explain then why not one, not two but THREE of these seemingly smart cookies chose contestant # 1 to be the real Tony Goodstone!!!?? Host Moore was himself just incredulous! And the fourth player chose the equally obviously false # 3!!! Hahhahahahahahaha! The truth is stranger than pulp fiction!
Posted by Booksteve at 11:04 AM