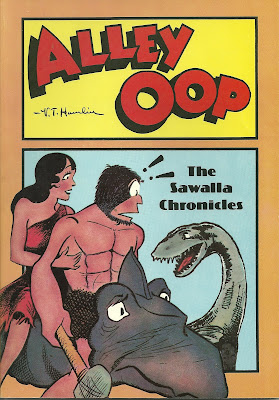 When classic comic strips are discussed it's rare to hear mention of ALLEY OOP and yet the time-traveling caveman has been around for nearly 80 years now and is still going...if not quite as strong as he used to be.

One of my earliest memories is of my mother reading me the Funnies from the local evening paper every single day. These included PEANUTS, POGO, THE RYATTS, FRECKLES, LI'L ABNER, TUMBLEWEEDS and...ALLEY OOP.

For those unfamiliar with creator V. T. Hamlin's wonderfully drawn strip, it started out as a humorous look at life amongst cave people and dinosaurs in the made up ancient land of Moo. Alley was the POPEYE-like lead character--strong, secure and with a set of values the other cave folk didn't always display. He also had a tamed dino named Dinny.

After a few years, the prehistoric domestic comedy gave way to one of the most imgainative storylines ever in comics when Hamlin introduced a time machine into the mix. Suddenly, Alley Oop was brought to the 1930's. Then Alley ended up in ancient Egypt, the Old West, the Gold Rush, Ancient Rome, feudal Japan, the Moon! Literally, the sky was the limit! In between his amazing adventures, he would even revisit Moo for more unrealistic but hilarious prehistoric foolishness. 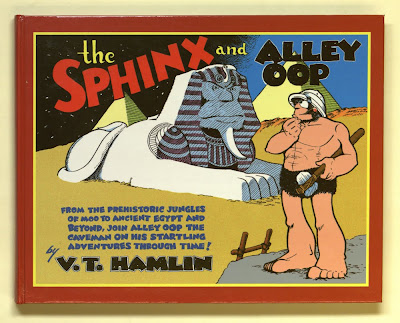 Alley was a smart cookie and learned to like modern conveniences and indulgences...particularly cigars. Alley's Moovian girlfriend Ooola was often involved in his historical adventures also and she, too, learned to dress and act more modern. She also learned to shoot!

ALLEY OOP has been reprinted a number of times over the years including the slim 1983 Ken Pierce volume seen here and the lovely and wide 1991 volume from Denis Kitchen. There were lots of comic book reprints throughout the forties and fifties, mostly from Dell. More recently there's been some nice DRAGON LADY PRESS reprint mags in the eighties and an apparently current limited circulation (and sadly out of my price range) ALLEY OOP MAGAZINE which it seems is edited by Frank (Foolbert Sturgeon) Stack. Circa 1960, there was even the popular hit novelty song, ALLEY OOP ("Oop, oop. Oop. Oop oop!"). The few attempts at animation have mostly and surprisingly been rather sad.

After all that, though, ALLEY OOP has survived his creator, his creator's successor Dave Graue and continues to this day as written and drawn now by Carole and Jack Bender. Here's this past Sunday's strip in fact, part of a current storyline in which Alley and Ooola are about to (so it seems anyway) finally get married after the better part of a century.

Like I said, one doesn't often hear ALLEY OOP mentioned in the same breath as KRAZY KAT, LITTLE ORPHAN ANNIE, BARNEY GOOGLE, WASH TUBBS, DICK TRACY and FLASH GORDON...but as entertaining and well drawn as it is and has been throughout its entire run, I'm at a loss to figure out why not.
Posted by Booksteve at 2:29 PM