I'm not a big fan of the way words like "classic" and "genius" get tossed around so lightly anymore. Latest case in point: Today on AOL (yes, I'm still on AOL. What's it to ya?) they had the intriguing little headline to the left. I, of course, clicked on it, expecting to see news of a possible TV series based on, oh, STEVE CANYON, BUZ SAWYER, THE METAL MEN, SUGAR & SPIKE...
Instead we find that the series in question is for....................THE WALKING DEAD!! Ummm....WTF? I know I haven't kept up with my current comics reading in recent years but is THE WALKING DEAD a classic? I mean, I KNOW it's popular and all and I hear Robert Kirkman is a pretty good writer. I've never actually read anything by him. We actually carried some of the collections of the series when I worked at the bookstore. Still...classic? By what definition? 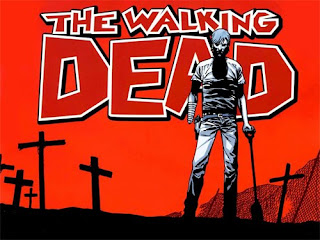 People, it may be popular, it may be well-done, it may be better than last month's DARK AVENGERS but that doesn't automatically make it a classic! A classic is something that stands the test of time and, if anything, enjoys an even better reputation over the years. THE WALKING DEAD is barely seven years old!
Not only that, this wasn't even news as AMC had, in fact, announced last Summer that they were planning on going to pilot with THE WALKING DEAD. Sigh. Add "news" to the list of words bandied about too easily these days.
Posted by Booksteve at 12:37 PM