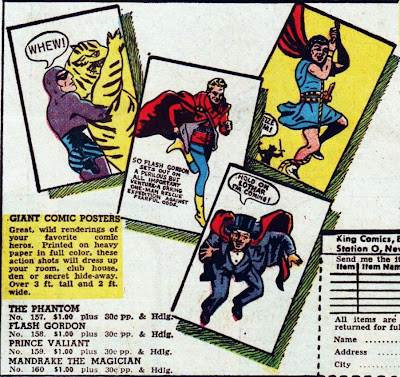 These were official King Features posters, orderable directly, as you can see, from King Comics. I really hope, therefore, that they looked better than these little images! I mean, seriously! Hal Foster's majestic PRINCE VALIANT looks like a really unattractive, pudgy guy in a skirt failing to climb a rope in gym class! Meanwhile, THE PHANTOM, the venerable Ghost Who Walks, looks suspiciously as if he has just consummated a rather bestial relationship with a tiger! MANDRAKE vaguely recalls Fred Astaire in a cape! Only FLASH GORDON shows more than a passing resemblance to his "real" self and it's still such a cheesy pic I wouldn't want it on MY wall! Can anybody point us to the real posters for comparison?
Posted by Booksteve at 6:44 PM