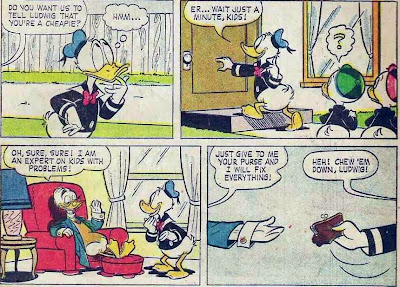 This one surprised me! I was casually flipping through the first LUDWIG VON DRAKE comic book story from 1961 this evening. Huey, Dewey and....oh, you know...that other guy...LOUIE! Yeah, that's it. Anyway, the nephews confront their uncle for their two bits allowance but Donald turns to his houseguest, the supposed expert on everything, Professor Ludwig Von Drake for advice on rebuffing them. As you can see, DD says in no uncertain or retouched terms to "chew 'em down." Now, I checked the Web and found no trace of an expression using those exact words but there IS, of course, a classically ant-Semitic expression which fits contextually and only requires the slightest spelling change in "chew."

Now, I'm not saying the writer was anti-Semitic....or even that Disney was although that has been rumored. I'm not even saying I was all that offended in spite of being in a part Jewish family. One has to see it in context. It's just interesting how casually--like the African-American stereotypes--things like this were tossed around in "wholesome" comics. They obviously knew it was bad or they wouldn't have changed the "J" to a "ch" so why leave it in at all?

1961 was certainly a different time. "Dell Comics are good comics," but maybe NOT as good as they thought they were.
Posted by Booksteve at 10:46 PM