Encyclopedia of Rock Music on Film 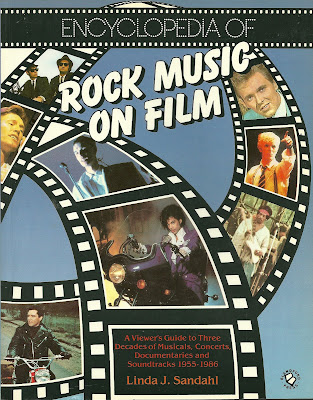 Let's look at yet another random book off the shelf here at the Library. Let me see here....Ah....here's one!
Today's title is the rather unimaginative ENCYCLOPEDIA OF ROCK MUSIC ON FILM. This is a 1987 British publication which is no more and no less than its title promises. Linda J. Sandhal offers an alphabetical list of each and every English language film she could find that ties in, one way or another, to rock music. There's not a lot of detail other than a few credits and a capsule review or summarization of most titles but the true fun of this book is in the photos, many of which I have never seen before or since. These include rare ads for such films as THE ROCKY HORROR PICTURE SHOW and Nilsson's SON OF DRACULA as well as odd stills of the likes of Frankie Avalon, Roy Orbison and an unusually gay looking shot of Cliff Richard with Tommy Steele.
Bottom line, as a very basic reference to rock music films and documentaries before 1986, it's better than nothing and every single time I use it, I can't resist looking through the well-chosen illustrations again!
Posted by Booksteve at 11:08 AM