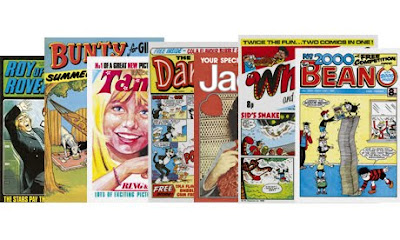 "Oh, to be in England..." Longtime readers will no doubt recall my anglophile status. Although I've lived all my life here in Kentucky (well, three years across the river in Ohio but that's another story), I was reading LOOK-IN in the 1970's whilst watching TV britcoms such as NO, HONESTLY (great theme song by James Coburn's then-girlfriend Lyndsey dePaul) and enjoying old Bob Monkhouse and Bernard Cribbens films on the telly. In the eighties I was all about DR. WHO. I even had to adjust my work schedule so as not to miss the Saurday night airings! Dez Skinn's WARRIOR, 2000 AD and DR. WHO WEEKLY (later MONTHLY) were all over my apartment whilst my music ran the gamut from the Beatles (them again) and the Who to Adam and the Ants and Duran Duran. Sherlock Holmes stories, Hitchcock films, Frankie Howerd, Sid James, Hammer films, CARRY ON movies...you get the idea!

Well, one thing I've always enjoyed are the old-fashioned British humor comics such as BEANO and DANDY. Now comes word for all of you UK readers (and I know there are quite a few! I check these things!) that the British newspaper, THE GUARDIAN will be distributing free facsimile reproductions of some of these nostalgic comic books. Here's the press release:
Remember how you were with seven classic comics for grown up boys and girls. We are printing an original issue of Jackie, The Beano, Roy of the Rovers, Bunty, The Dandy, Tammy and Whizzer And Chips every day in the Guardian and the Observer from Saturday 12 September.
It all starts on Saturday with the 1975 Valentine's Day special of Jackie, featuring David Essex, Slade, the Cathy and Claire problem page and a Donny Osmond strip story!
The Beano's back on Sunday with the 2000th issue from 1980, featuring a Dennis the Menace front cover and all your favourites: Lord Snooty, Minnie the Minx and the Bash Street Kids.
On Monday it's the one where Roy Race is shot in Roy of the Rovers from 1981, followed by the Bunty 1972 Summer Special on Tuesday. The Dandy, with the last Korky the Cat cover from 1984 is your comic for Wednesday, while Thursday sees the return of the very first Tammy from 1971. And finally, on Friday, catch up with Sid, Slippy and Shiner in Whizzer and Chips, two comics in one!

Posted by Booksteve at 7:06 AM