Johnny Thunder as the Thunderbolt! 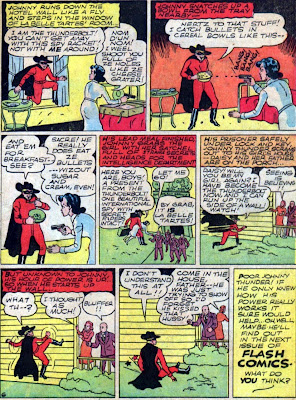 The original JOHNNY THUNDER never did sit well with me. Why was he in the JSA? Oh, the Thunderbolt. Okay, I guess. Still...he was such a klutz and a lousy dresser to boot! Y'see, Johnny's only powers came from a magic, genie-like thunderbolt who only appeared for a brief time after Johnny said the word, "Cei Yu" which, of course, is pronounced "Say You." Now this was probably mildly amusing in the 1940's when the word "Say" was used in much the way we now use the word, "Hey." By the sixties, the chance of him accidentally pronouncing the correct syllables so frequently would seem to have decreased substantially.
Originally in the strip, Johnny didn't even know he had a magic helper--he just thought he had amazing luck! As time progressed, the already humorous strip picked up Johnny's little sister (I think), one Peachy Pet, the uuuuugliest child in comics history! During this period much of the action was between the little girl and the Thunderbolt (and sometimes the Thunderbolt's family!). Eventually, a female crook named Black Canary appeared in one story. Well, she wasn't REALLY a crook except in the sense that she quickly stole Johnny's strip for her own and soon after replaced him in the JSA!
One little known early JOHNNY THUNDER story, however, actually had Johnny deciding to become a masked mystery man (as they were called back in the day). Here is a page with Johnny--as ever not realizing that the powers don't come directly from him--as the Thunderbolt!
Posted by Booksteve at 8:43 AM