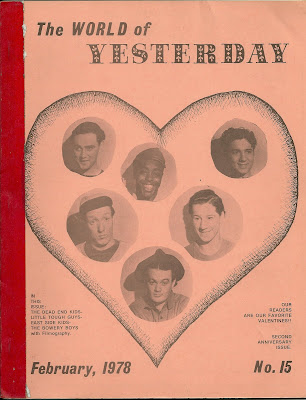 Ben Ohmart reports that Charlie Stumpf has died.
Fresh out of high school in 1978, I conceived the idea of writing a book on those neglected laugh-getters, the Bowery Boys. With a little research (which wasn't always easy in those pre-Internet days) I discovered THE WORLD OF YESTERDAY, a mail order nostalgia fanzine which this issue devoted its entire contents to just exactly that, as written by someone named Charles Stumpf. And it (seen here)was a good one, too! A few years later I was dating a 24 year old girl (I was 26 at the time) who was, strangely enough, a huge Old Time Radio fan. As a gift, I bought each of us a copy of a then-new eight dollar mail order book on Fibber McGee and Molly entitled HEAVENLY DAYS. It was one of the best books I had found on any aspects of OTR and it just happened to be written by Charles Stumpf. (If there's any doubt how good it was, Amazon has dealers offering out of print copies from $125.00 to $800.00+!) Cut to 1990 and I'm playing opposite Ezra Stone and Bob Hastings in a Cincinnati Convention re-creation of the LUX RADIO THEATRE version of George S. Kaufman's YOU CAN'T TAKE IT WITH YOU. Also in the cast is one...Charlie Stumpf!
Realizing where I knew the name from, my wife and I took him to dinner between the rehearsal and the show. He was an absolutely delightful man (as well as a passable actor) with a passion for times past and a detective's instincts for digging for details. He talked extensively that day of a planned book on Walter Tetley that was eventually completed by Bear Manor's Ben Ohmart from Charlie's research. In fact, Ben and Charlie became connected. In looking Charlie up for this piece, I actually found a forgotten post from Ben Ohmart on a board from late 2001 with an early comment from booksteve! It would be about six years later before I myself would have work appearing in some of the books Ben published, something that probably would not have happened had Ben not connected with Charlie.
It's my understanding that he had been quite ill for some time but I don't know any details. Still, condolences to friends and family. Pop culture has lost a truly passionate historian. Say hello to Fibber and Molly, Charlie but whatever you do, don't open that closet door!
Posted by Booksteve at 12:47 AM