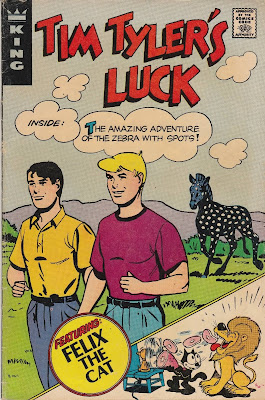 TIM TYLER'S LUCK was a long-running newspaper strip created by Lyman Young, brother of BLONDIE creator Chic Young. Despite its quality, its once hefty circulation and its nearly 70 year run, it was ultimately a relatively uninteresting and unimportant strip that dealt with a young man's African and international adventures.
What we have here is a 1973 issue of TIM TYLER'S LUC

K from King Comics. Okay, now let us discuss the problems with that sentence.

1) King Comics suspended their line six or seven years earlier and according to GCD never published a TIM TYLER'S LUCK comic.
2) The indicia indicates this comic was published by Charlton in spite of what the cover says.
3) This is predominantly a FELIX THE CAT comic, featuring only one brief badly drawn TTL story and a cover.
4) 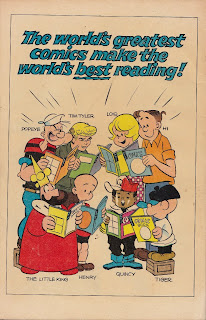 According to the Grand Comics Database, TIM TYLER'S LUCK only ever appeared in comic books in the 1940's in ACE COMICS and never had its own title!

I wrote veteran comics historian Lou Mougin for help with info on this title which is found often on EBay but never with any real descriptive info. He replied that it was a new one on him. According to Lou, King DID distribute educational comics to schools in the seventies so one can presume--in spite of very little educational content--that this was one.

This, of course, begs the question of what OTHER unknown comics King had in this series. The back cover here seems to indicate the possibility of comic books featuring POPEYE, HI & LOIS, QUINCY (Not Jack Klugman's), TIGER, HENRY (who has one page in TIM TYLER'S LUCK) and THE LITTLE KING.

Anyone have any other info on these?
Posted by Booksteve at 9:57 AM