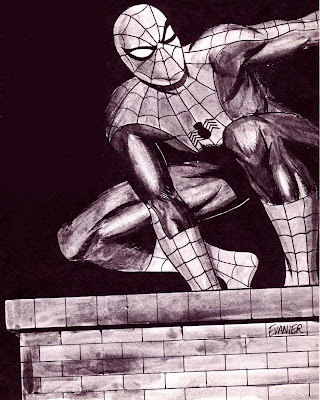 Yesterday we ran through a list of the Hulk's biggest artists of the 1960's. Quick, now! If I asked you who your favorite Spider-Man artist was from that period, I'm fairly certain you'd say Ditko or Romita or maaaaaaaybe Larry Lieber, Don Heck or Jim Mooney. I'm not sure without checking but it's possible Gil Kane had even started his run by then. One thing I'm totally sure of is that you would NOT say Mark Evanier and yet here 'tis! Ol' Webhead drawn by one of today's best known comics bloggers!
This surprisingly good (no offense, Mark!) illustration comes from 1970's MARVELMANIA # 4, the last issue edited by Mr. Evanier (More or less. Talk about long stories for another day!). There it accompanied an anecdotal three page piece on the evolution of Peter Parker and Spider-Man. You know, exactly the type of piece that Mark Evanier is still known and appreciated for nearly four decades later now!
Posted by Booksteve at 8:44 PM