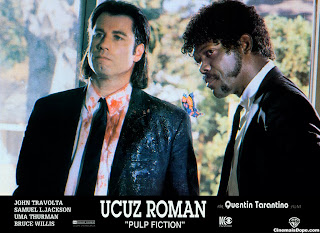 Writer/Director Quentin Tarentino endeared himself to filmlovers and simultaneously revived John Travolta's nearly flatlined career with his creation of a pair of unlikely buddy killers named Vincent Vega and Jules Winnfield in 1994's smash hit, PULP FICTION. Vincent is white, quirky, chatty, nervous and cruel. Jules is black, witty, intelligent, philosophical, soft-spoken but with a bad temper and has a penchant for quoting the Bible. The two tend to bicker and banter back and forth. My question is...was Quentin a McCLOUD fan?

I haven't seen this mentioned in any of the articles, interviews or IMDB trivia sections about PULP FICTION but is there a possibility that Quentin based his two mismatched hit men on a similar pair of characters appearing in a 2nd season episode of that TV series that originally aired in 1972?

McCLOUD was a popular, long-running cop show whose gimmick (all cop and detective series in the seventies were required to have a gimmick) was that it's main character was a cowboy uprooted to Manhattan. In this particular episode, "A Little Plot at Tranquil Valley," full-time mortuary owner and part-time criminal Burgess Meredith has a couple of killer minions named Richard and Morgan. 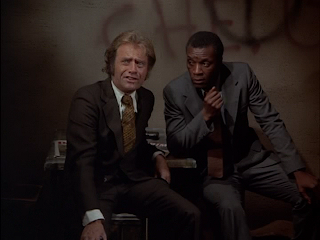 Richard is white, quirky, chatty, nervous and cruel. Morgan is black, witty, philosophical, intelligent, soft-spoken but with a bad temper and has a penchant for quoting Shakespeare. COMBAT star Vic Morrow plays Richard and distinguished African-American actor Moses Gunn (in SHAFT the year before) plays Morgan. The two have nearly all of their scenes together and play off of each other very well.

So, did young, impressionable Quentin watch McCloud and without even realizing it file away these character types? Just asking. Anybody out there know Quentin? Ask him and let us know!
Posted by Booksteve at 11:18 AM