DRACULA was an unusually titled Spanish horror magazine originally published in 1971. Unusually titled because there were very few vampire appearances, let alone any by Drac himself. The issues were reprinted in English in the UK a year on and still later some stories (all?)were published in book form by Warren Publishing in the US. I've never seen the US version in spite of the fact that someone at Warren rewrote a letter I had published in a contemporary issue of VAMPIRELLA to include in it an extensive plug for their DRACULA.

I did, however, mailorder the 12 issues of the British version through a TBG ad. I waited impatiently for weeks and never heard anything from the seller. Finally, I wrote and was answered with a letter apologizing for the delay and offering to send me something else instead. I wrote back and agreed, accepting something now long forgotten in place of the mags. Whatever it was, it arrived quickly. Months passed and one day I received the original order--all 12 DRACULA issues in near mint condition! Shocked and surprised, I felt guilty as I had already accepted some 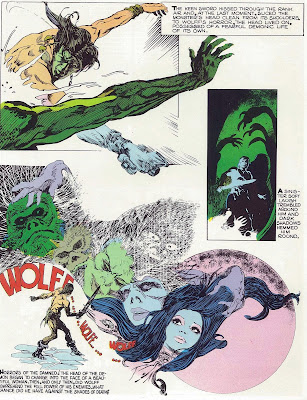 thing else for my money! I contacted the Post Office (for some reason) and was informed that under US postal law the DRACULA shipment was now considered separate from the completed original transaction and, since I had placed NO re-order for the items, they were now considered legally to be "a gift" for which I could not be charged by law. Hmmm...seemed fishy to me. I still felt guilty. Hell, I STILL feel guilty. I kept them, though.

Looking at them today, I find the stories virtually unreadable but the art absolutely breathtaking in spots! Every issue features the same four artists in the same order, all behind painted covers that look as if they could have been lifted off of contemporary horror novels. The highlight of every issue is WOLFF, a CONAN-like barbarian strip by the brilliant Esteban Maroto whose work was just then beginning to appear in mainstream US comics. Stylish and colorful, I don't really care what the story is about. It's just fun to look through every page and savor every panel.

Josep M. Bea had the seco

nd spot with completely different but equally stylized art. Already familiar to me from Warren work, he was not a favorite at the time but I look at it now and it looks better than most comics art of its day. Bea seems to have been an an interesting person, too. According to Wikipedia, "In 1979 he was convicted for offenses against morality for the content of one of his stories...and was forbidden (for some time) from doing anymore artwork." Wow. 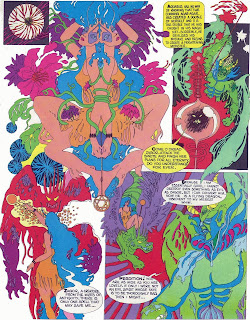 The series AGAR-AGAR answers the perhaps unasked question, "What would it look like if Peter Max had drawn comics?" Actually, the artist was Alberto Solsona clearly channeling the master of psychedelic pop art! Something about fairies and demons and peace and zen and yellow submarines (Not really, sorry). Who knows? It really doesn't matter, I tell you. It may read like a series of bad hippie tracts but the visuals alone will ensure you a good trip over and over again!

My favorite contributor then and now is Enric Sio, already a veteran of Spanish and British comics although I had never seen any at that time. Even though he clearly utilized extensive photo reference, the 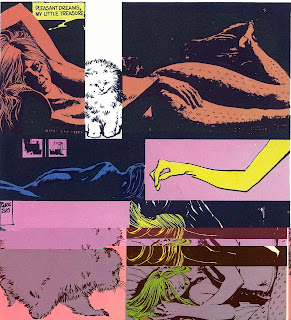 artist twisted and turned the most ordinary images into foreboding or downright creepy images. With some of his pages nearly wordless in every issue, there are some genuinely disturbing visuals here in his one-off terror tales which, for a horror comic, really isn't a bad thing!

Overall, I find this more interesting than good, more visually stimulating than enjoyable, more impressive looking than truly well done. In the end, I think the biggest impact that DRACULA had on me was to introduce me to a lifelong appreciation for several very different--non Kirby-like--styles of comics art.
Posted by Booksteve at 9:56 PM