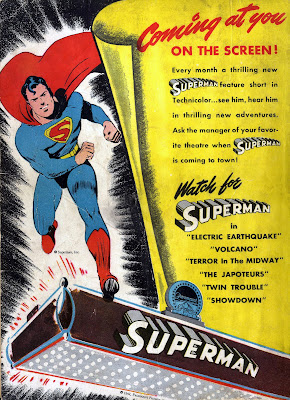 Not as popular in their day as one might think, the Fleischer/Famous SUPERMAN cartoons are now regarded as a highwater mark of animation and an inspiration for generations of animators, artists and filmmakers since! Here's a cool ad for them from the early 1940's.

Much less influential and certainly nowhere near as well animated, there was also a whole series of nevertheless enjoyable SUPERMAN cartoons from 1966. These were the first cartoons made by Filmation and even though the targeted audience could never have heard of the classic SUPERMAN radio series that had ended so 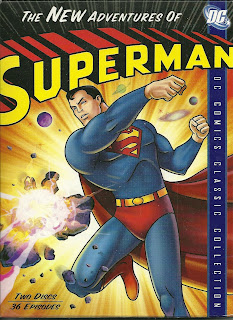 me 15 years earlier, the producers cast the stars of that series--announcer Jackson Beck, Joan Alexander as Lois Lane and Bud Collyer (by that point re-invented as host of TO TELL THE TRUTH) as the Man of Steel. I picked up this set of all 36 of these nostalgic limited animation cartoons at a grocery store last weekend (of all places) for just a couple bucks. The documentary extra with Mark Waid, Paul Levitz, etc. is worth the price by itself!
Posted by Booksteve at 1:47 PM