Many,many thanks to Todd Hillmer of the great comics archive BARNACLE PRESS at http://www.barnaclepress.com/ for finding the debut of Galexo, the super hero who replaced Batman in his own newspaper comic strip in April of 1972! We wrote about the elusive character previously here: http://booksteveslibrary.blogspot.com/2009/06/galexo-and-batman.htmlatman.html A quote from that piece--
Although most papers dropped it much sooner, the strip actually limped on until 1974 during which time it took some fascinating turns! Not the least of these was givin 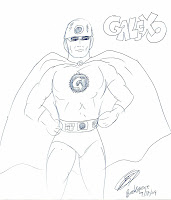 g up Batman and Robin a year or so before the end but retaining Bruce Wayne and Dick Grayson in support of a new hero called GALEXO! As this strip has never been reprinted...its very scarcity has made it intriguing to fans.

Intriguing it has been and I know a number of great researchers have been helping me search from time to time and now here we have it. According to Todd, though, even the newspaper where he found these dropped it within a couple of weeks and yet it continued on for two more years so keep looking! We want more. This just seems so horribly wrong as to be weirdly great! Also seen here is my quick draw attempt (at 2 AM) at drawing the character based on what's seen here.
Posted by Booksteve at 2:17 AM