Movies That Fell Through the Cracks # 55 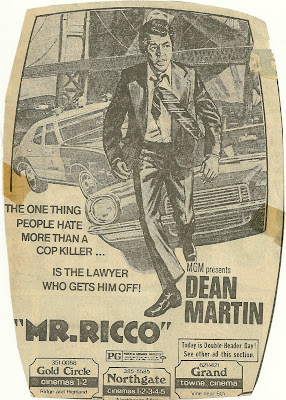 Although noted for his breezy, devil may care style throughout his long career, Dean Martin gave a number of quite excellent performances over the years in various movies. Among these are THE YOUNG LIONS (1958), RIO BRAVO (1959) and a surprising standout performance in the 1970 all-star potboiler, AIRPORT. For the most part, however, his solo film career is made up of light comedies, forgettable westerns, the Matt Helm spy parodies and Rat Pack cameos. His final solo vehicle, from 1975, is a pointless and forgotten thriller called MR. RICCO. What posessed him to say yes to this one I do not know.

Dino walks through his role as a San Francisco attorney who successfully defends a killer (the always enjoyable Thalmus Rasulala) against a murder charge only to then be stalked because of that success. A good supporting cast included Denise (ROOM 222) Nicholas, Eugene Roche (the guy from the ubiquitous seventies dishwasher commercials), Geraldine Brooks and early appearances by LAVERNE & SHIRLEY's Cindy Williams and MIAMI VICE's Phillip Michael Thomas. As I say, a good supporting cast but pretty much a TV movie supporting cast. Add to this the fact that TV veteran Paul Bogart directs and again I have to wonder how this late MGM release ever found its way--briefly--into theaters. Even in the dull newspaper ad Dean reminds one of a MAD parody of himself. Note that the ad itself is shaped vaguely like an old-style TV screen. What were they thinking?
Posted by Booksteve at 10:55 AM