The Deep vs. Star Wars

THE DEEP was a 1977 film about underwater treasure hunting that starred Robert Shaw, Nick Nolte, and--if you were to believe any of the ads at the time--Jacqueline Bisset's breasts. The great Lou Gossett and Eli Wallach co-starred. It was written, based on his own novel, by Peter Benchley, the man behind 1975's JAWS which had become the biggest grossing film ever by that point and had been nominated as Best Picture at the Academy Awards. The director was Peter Yates who had helmed BULLITT and would soon do the Oscar-winning BREAKING AWAY. THE DEEP was poised and marketed to be the biggest movie of that heady summer season if not the b 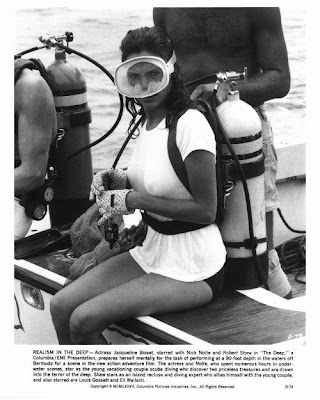 iggest of the year and possibly one of the biggest films of all time. I remind you all of this because I would venture to say that few movie fans under the age of 40 or so actually have heard of THE DEEP.

It seems that on the way to its presumed place in the pop culture pantheon, THE DEEP was upstaged by a little picture released a couple of weeks earlier--STAR WARS. STAR WARS was almost immediately THE runaway summer hit for everyone but the hardcore sci-fi writers and fans. Ben Bova was misquoted in TIME making it sound as though he liked it when he didn't. Harlan Ellison corrected that impression in a five page lambasting of George Lucas' movie published in GALLERY later that year. 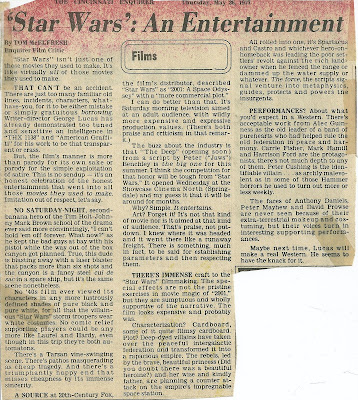 I saw STAR WARS that opening weekend and, like most fans, many times more over the next year! As a huge film fan, I also saw THE DEEP when it opened. It was a matinee on the picture's opening weekend and there were only a handful of people in the downtown theater...most apparently awake and sober. The only thing I really remember about what we were TOLD would be the movie of the year is that it had some great underwater photography.Oh and...well...Jackie did have nice breasts!

Printed here is a vintage STAR WARS review from THE CINCINNATI ENQUIRER in which Tom McElfesh begins to suspect THE DEEP might have competition.
Posted by Booksteve at 1:56 PM