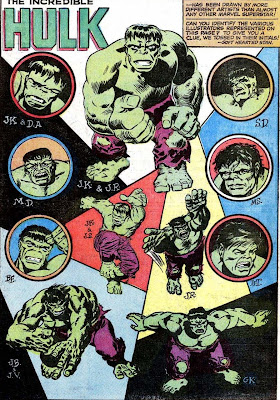 From that same HULK ANNUAL #1 that we mentioned yesterday, here's a nifty pin-up comparing the different visual interpretations of Ol' Greenskin up to that time by different artists. Just in case you aren't as well-versed in the artists as we all were at the time, here's a run-down on the owners of those initials:
JK/DA-Jack Kirby and Dick Ayers
MD-Mickey Demeo (Mike Esposito)
BE-Bill Everett
JB/JV-John Buscema and John Verpoorten
GK-Gil Kane
HT-Herb Trimpe
JK/JS-Jack Kirby and Joe Sinnott
MS-Marie Severin
SD-Steve Ditko
JK/JR-Jack Kirby and John Romita (Sr)
JR-John Romita (Sr)
To this day, I much prefer the Kirby and Ayers look from the original series. It gave the character a more unusual look so he didn't just appear to be a big green guy on steroids.That said, there's something to be said for all of these. Marie (and later John) Severin gave the character more humanity, Ditko's had more pathos, Buscema's was certainly more animal-like and threatening. Perhaps odd that the "definitive" Hulk artist of the seventies turned out to be Herb Trimpe whose visual look was arguably the most generic. What was YOUR favorite?
Posted by Booksteve at 5:09 PM