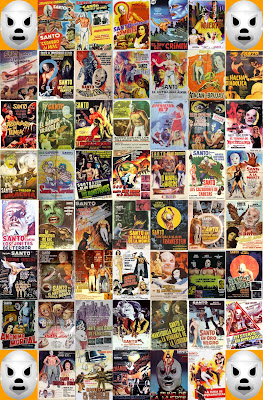 I wish I could remember where I found this so as to credit the person who did it but I can't and it's too cool not to post--a collage of all (or nearly all) of the South of the Border Luchador films starring Mexican wrestling superhero El Santo! El Santo was a real-life wrestler who made movies for two decades in which he fought everything from gangsters and robots to supernatural monsters and aliens! When he died he was buried in his mask while his son continued the family legacy. Along with wishing I knew who made it, I wish it were bigger, too but even so, a nifty piece.
Posted by Booksteve at 4:08 AM