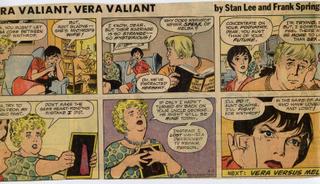 Artist Frank Springer drew tons of those spot-on, politically incorrect comic book parodies for NATIONAL LAMPOON back in the seventies. Maybe that’s why Stan Lee’s 1976 comic strip THE VIRTUE OF VERA VALIANT, drawn by Springer, comes across like a tediously written Lampoon parody itself. Around the same time, the long-gestating SPIDER-MAN strip was getting under way. Both written by Stan the Man himself, VERA would give up the ghost fairly quickly while Spidey still swings through a handful of papers to this very day!
There was a book collecting some of the VERA strips but it is SO obscure that we don’t even have it here at the Library. We do, however, offer a brief selection of actual strips as clipped from a great metropolitan newspaper back in the day. These examples are from October of 1976. 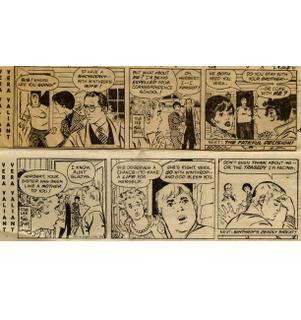 Note that this particular paper, like many I’m told, chose to re-title the strip as VERA VALIANT, VERA VALIANT. I seem to recall an interview in which Stan voiced displeasure at this but clearly it was an attempt to identify the strip’s unusual humor with that of the surprise TV hit soap parody, Norman Lear’s MARY HARTMAN, MARY HARTMAN(Mary Hartman). I never "got" MH, MH but I remember at the time that its bizarre, drawn out story-lines were considered positively chic to the Studio 54 crowd for some unfathomable reason and star Louise Lasser (best known as Woody Allen’s ex until the series) was the flavor of the month until she ended up in rehab. That said, MH, MH did spin off FERNWOOD TONIGHT (Classic TV: Fernwood 2Nite), a singularly hilarious version of a small town talk show with Martin Mull and Fred Willard. FT became the even funnier AMERICA TONIGHT and rode off comfortably into cult TV history. VERA VALIANT became, like most of Stan’s newspaper comic strips (including SPIDER-MAN!) a trivia question. As for Stan himself, the once great comics creator went on to a minor film career, appearing in small roles in films such as THE PRINCESS DIARIES 2 and THE FANTASTIC FOUR.
Posted by Booksteve at 7:49 AM