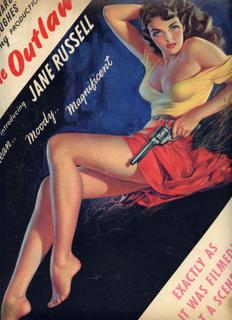 Myrna Loy (See previous post) is actually much more "my type" but I must admit to a fondness for pin-up art. This particular example is the poster art for Howard Hughes' notorious 1943 western, THE OUTLAW featuring Jane Russell's debut. You can't tell it from this picture but the title character was actually Billy the Kid, played by one Jack Beutel. (Who?) Wouldn't you think they'd put both of the picture's stars on the poster...oh...that's right. They did. That's probably the 625,023rd variation on that joke in connection with this movie. The rumors at the time were rampant that gazillionaire Hughes was making a pornographic western! Clearly, he did overly emphasize his new discovery's bosoms but he was no Russ Meyer. The film itself is dull beyond dull, in spite of the supposed contributions of Howard Hawks and Ben Hecht. It's a great comedown for the producer of such action packed epics as HELL'S ANGELS. The advance word of its supposed naughtiness generated considerable controversy that kept it off screen for some time, thus this particular poster's half-scanned proclamation, "Exactly as it was filmed! Not a scene cut!" Jane rode out the scandal to become a respected actress and singer rather than the flavor of the month. (I personally saw her sing at a Bob Hope charity gala in the mid seventies and she was still a treat!) Hughes produced a number of other lackluster pictures and eventually a bizarre legend. Beutel became an immediate trivia question.
I started watching THE OUTLAW on TV the other day for the first time since the seventies but I quickly changed to JIMMY NEUTRON. The print was bad, the writing bad, the picture bad. The only thing good about it actually IS Jane Russell and even she's served much better by the classic pin-up art of the above poster.
Posted by Booksteve at 4:21 PM