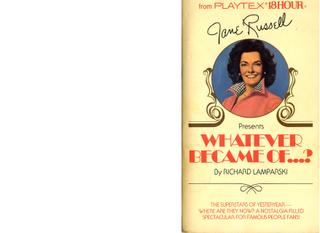 Nearly forty years on from THE OUTLAW, Jane Russell was still capitalizing on her best known assets as the TV and print spokeswoman for Playtex 18 hour bras. Seeing as how this gig began during the era in which feminists were burning their bras for political effect and continued into the era where many young women simply chose not to wear them, Jane's familiar smiling countenance undoubtedly was much needed by Playtex. This book was offered as a premium to Playtex customers. The book itself is a fun compilation of author Richard Lamparski's WHATEVER BECOME OF...? books that were quite popular during the seventies nostalgia boom. This particular edition does contain something the regular books don't offer, though. It has a three page introduction by Jane herself! The books continued into the mid-eighties but as far as I know this was the only special edition.
Posted by Booksteve at 8:22 AM