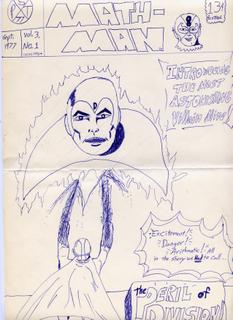 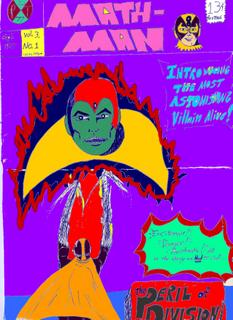 Like most comics fans, I created my own super-heroes as a child. My best creations were Delta Man, Powerman and Lightning, all of which were duly ripped off from other characters, mainly Green Lantern, Dynamo and the Flash. I didn't actually draw comics but I used to draw covers. Just covers. I'm sorry to say that I don't have a single one left in my collection, however. What I DO have is the one and only comic book I DID do, an issue of MATH-MAN, written and drawn by yours truly at the age of eighteen. I did the first version of this comic about two years or so prior to this version. It, too, is long gone. The second version is somewhere in the archives. This, however, is the third, final and, if I do say so myself, best version. Counting the cover, Math-Man's battle with the evil Division runs seven pages and over the next few days, we'll serialize it here at the Library. I couldn't resist the temptation to colorize the cover but I must admit the art looks better in black and white so let's just consider this as my belated contribution to the black and white boom of a few decades back. Comments would be appreciated. Oh, and don't say it looks amateurish, okay? I mean...IT WAS AMATEURISH!!!! That said, I still find it entertaining which is more than I can say for just about anything published by Pacific Comics.
Posted by Booksteve at 5:42 PM