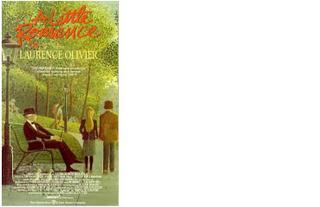 In spite of my unquestionable geek credentials, this is one of my all-time favorite movies. A LITTLE ROMANCE is a gentle, funny, intelligent comedy that’s more romantic in its own way than a dozen Doris Day/Rock Hudson films. It was popular in its day (1979) and won or was nominated for a number of awards but I can’t help but think that it was too hip for the room even then. Note how the poster just screams excitement!
Essentially it’s the story of two smart young teens who fall in love in France and team up with a charming old con man to run away to Italy. Lauren (Diane Lane in her very first film) is the daughter of movie star Sally Kellerman who’s in Europe shooting a picture. Lauren is intellectual and meets Daniel, a young local boy as well versed in the great philosophers as she but also a bit of a street-wise con artist. They bond and run into, of all people, Lord Laurence ("Call me Larry") Olivier in an absolutely delightful, scenery-chewing performance as Julius, a kindly old man who just happen 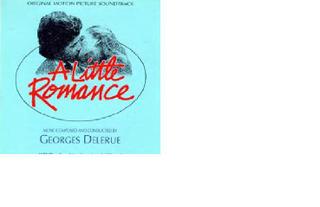 s to be wanted throughout Europe for various schemes. Thinking he’s just telling them a story, he says that two lovers who kiss at sundown under the bridge of sighs in Venice will be lovers forever. They’re young, they’re bored and the hormones are kicking in so they decide it’s time for a road trip. Feeling a tad guilty, Julius tags along to keep an eye on them but before you know it, the word is out that he’s kidnapped the kids and the chase is on! Determined to reach the bridge in time, our heroes travel by train, car, bicycle (Olivier’s biographers point out that the ailing, eighty-something actor did his own riding in a bicycle race in the picture, giving pro 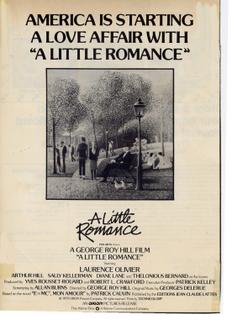 ducers heart attacks) and ultimately gondola to achieve true love!
There are marvelous performances by all! Olivier won the Golden Globe and both kids were touted as natural actors. Lane got a feature story in TIME but Thelonious Bernard (Daniel) shows only one other credit on IMDB. Hmmm. More or less washed up star Broderick Crawford is a delight as more or less washed up star Broderick Crawford who can’t remember his own career and just wants another drink. Sad in a way but so funny! Arthur Hill (TV’s OWEN MARSHALL) is the voice of reason as Lauren’s father.
Behind the scenes pedigrees are spotless. Directed by George Roy Hill who did BUTCH CASSIDY AND THE SUNDANCE KID, THE STING and another favorite of mine, THE WORLD OF HENRY ORIENT, the script was by Allan Burns who created THE MARY TYLER MOORE SHOW and MY MOTHER THE CAR (Well, okay, perhaps not completely spotless).
I love my Ed Wood collection, my CARRY ON collection, my serials, no budget horror films, multi-million dollar super hero pictures, cheesy rock musicals, teen sex comedies and violent car chase melodramas but sometimes, at the end of the day…what I really want even now is A LITTLE ROMANCE
Posted by Booksteve at 7:57 AM