The Thin Man Goes To DVD 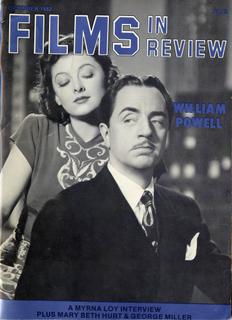 Amazon.com: DVD: The Complete Thin Man Collection (The Thin Man / After the Thin Man / Another Thin Man / Shadow of the Thin ...
Just out on DVD is a marvelous looking box set featuring all six of the delightful, light-hearted THIN MAN mysteries with William Powell and Myrna Loy. They also made seven other films together and always maintained an absolutely delightful chemistry between them. The words "modern" and "bantering" are commonly used to describe their on-screen relationship and it comes through in almost all of their team-ups made between the early thirties and the late forties. Oh, the mystery plots were usually well-crafted and there's always a first rate squad of character actors (including Shemp Howard in one!) to back them up but the main attraction here is Powell and Loy. The issue of FILMS IN REVIEW to your left came out in 1982. At the time, Powell was a frail 90 years of age (He would pass in 1984)and Loy speaks here of visiting her former co-star every time she flew to the West coast. She says that fans could never understand how they couldn't be married in real life but points out that if they had been lovers they would've fought like lovers do and if they had been married it would've been worse. As it was, their deep friendship outlasted lovers and spouses and lasted half a century.

Oh, for more info on the books, the films and the mysteries themselves, try this link:
Nick and Nora Charles. For more info on the box set and its quite nifty extras that include TV episodes, radio episodes, documentaries and Robert Benchley short subjects(!), check out the Amazon link above. If you've never seen these films, I don't care what age you are you're in for a treat. Well, actually if you're, like ten or under...or an immature fourteen you'll undoubtedly get real bored but, hey! Your loss!
Posted by Booksteve at 12:29 PM