Doctor Strange at the Movies

Steve Ditko's run on Doctor Strange (with Stan Lee but make no mistake! Even more than Spider-man, Doctor Strange was Ditko's.)is one of my favorite early Marvel continuities. Oh, a super-hero magician was hardly new. In fact, at one time in the forties, there were probably more t 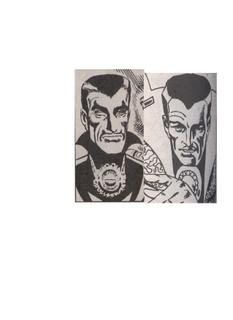 han a hundred from Mandrake to Sargon to Zatara. Initially, though, this series had more in common with series like DC's Doctor Thirteen, the Ghost Breaker as Doc helped various ordinary folk deal with paranormal crises whether they believed in the paranormal or not. Once it hit it's stride, though, we had a long, psychedelic (which, if you know anything about Ditko is 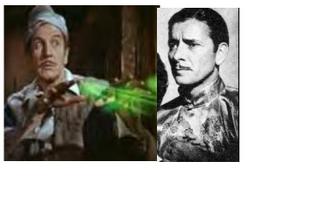 weird in and of itself) odyssey of a story featuring Strange on the run throughout our world and the trippiest dimensions ever imagined on paper, eventually battling the dread Dormammu and meeting t 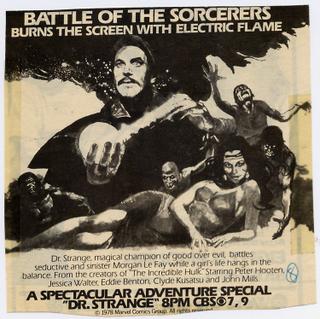 he quite literally awesome figure of Eternity. Did you ever notice how much movie reference Ditko used? Peter Parker, as drawn in many early issues of Spidey, was clearly drawn to look like then popular movie star Robert Walker, Jr.
When Doc first appeared, it was around the same time as Roger Corman's THE RAVEN was in theaters. Thus the early Strange (above left) resembles that film's star Vincent Price (above far left). When Ditko and Lee finally did the magician's origin, however, they turne to the film LOST HORIZON for plot points and then Strange began to resemble that film's star, Ronald Colman (See also above).
In 1978, a minor actor named Peter Hooten played Dr. Strange in a TV movie/pilot that is regarded by many fans as one of the best of the Marel TV projects (certainly better than the TV Daredevil who had no eyeholes in his mask. According to legend, Stan Lee brought this to the producers' attention and they said "He doesn't need them! He can't see!" to which Stan the Man reportedly replied "But no one is supposed to KNOW that!!") Note the resemblance even in this ad to the picture of Price above. I haven't actually seen it since 1978 but I remember it fondly and if YOU want to see it, it is out there somewhere on VHS and, I'm told, turns up on the Sci-Fi channel from time to time.
Posted by Booksteve at 4:23 PM