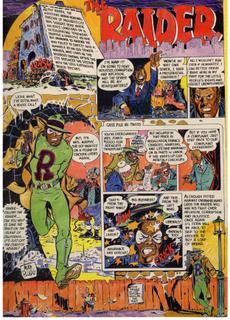 In an earlier post, we mentioned former Will Eisner student Alex Saviuk. This time we offer another former Eisner student/assistant, Mike Ploog, as we delve into the archives for an early seventies issue of ESQUIRE which featured unusual super-heroes designed by the hot young comics artists of the day including those STUDIO boys, Wrightson, Jones and (Windsor-)Smith. Intended as social satire, most of them are pretty to look at but fall flat. While we may revisit some of these later on, allow me to share with you now THE RAIDER by Mike Ploog. Although he never actually worked on THE SPIRIT, it is amazingly clear here that Ploog, then famous for Marvel's WEREWOLF BY NIGHT and GHOST RIDER (and later known as a film design artist) could've carried on that strip without anyone even noticing that it wasn't Eisner. Hey, wait a minute! DC is fianally reviving THE SPIRIT! Somebody call Ploog! Quick!
Posted by Booksteve at 3:49 PM