The Flintstones You Never Saw 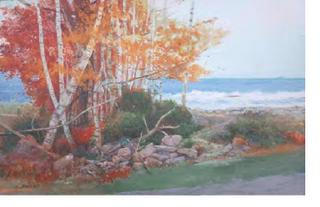 This is a painting entitled BIRCHES by one Mel Crawford, known for decades for his beautiful New England shots. Here's his website:Mel Crawford Inc Home Page . In his bio it mentions that he once worked for Disney and Sesame Street among others. In fact, his best-known work MIGHT just be the book tie-in to Dr. Seuss' GERALD MCBOING-BOING, released briefly when the original cartoon came out but re-released just a few years back and still in print as far as I know. He also illustrated beautifully a considerable amount of children's books over the years including this FLINTSTONES one that my mother bought me w 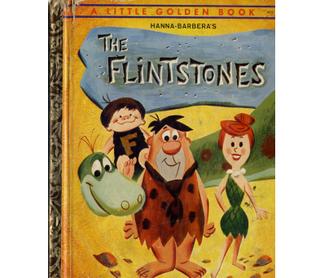 hen I was about two years old. 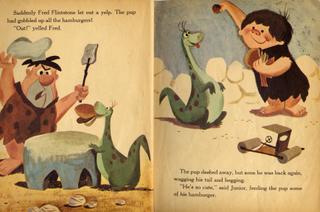 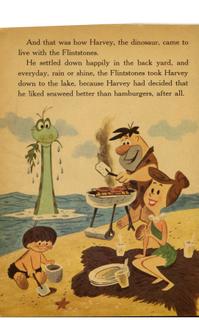 As you can see, this book, which was prepared just PRIOR to the television series debut, features an alternate world version of THE FLINTSTONES--Fred, Wilma, Fred Junior(!!) and their new pet Harvey (although he looks more like Cecil the sea-sick sea sepent on that final page!) with no trace of Barney, Betty, Dino or Pebbles and Bamm-Bamm(still several years away from their conceptions actually). I'm not certain whether Junior was originally planned for the TV series but if so, he was clearly sacked early on unwittingly preparing the way for Pebbly-Poo and one of the most anxiously awaited births in TV history. (Certainly, the Welch's people were waiting as I doubt Junior had the marketing appeal that sold all the jelly and grape juice that Pebbles would eventually sell!)

Mel Crawford did a considerable amount of the Little Golden Books, of which this was only one. Check out his site and do some searching on the Net and I'll bet you find out that he illustrated one of your favorites! This one was always MY favorite!

Posted by Booksteve at 9:07 AM