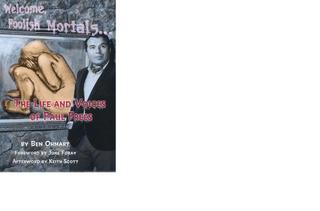 Well, here at the Library, we finally got hold of a copy of publisher/author Ben Ohmart’s delightful book on the late great voice actor, Paul Frees. The book is entitled WELCOME FOOLISH MORTALS…, a greeting Frees used (and still does posthumously I’m told!) on Disney’s original Haunted Mansion ride. Like most books of this sort, many of the best of which are being published by Ohmart’s Bear Manor Media, we have a bit of biography mixed in with a lot of career history and, especially in this case, a wealth of rare photos. Known as “the Voice of God” for his distinctive deep voice reminiscent of Orson Welles, he was equally adept at high pitched animated character voices such as Boris Badenov and the Pillsbury Doughboy. I recall reading once in the seventies that little Pop-n-Fresh had made Frees the richest man in his field. As a child, his was perhaps the first voice I could pick out in cartoons. He was the Thing in FANTASTIC FOUR and almost always appeared in MISTER MAGOO TV cartoons and Rankin-Bass holiday specials. He even played two (count ‘em! Two!) of THE BEATLES on the fab four’s animated namesake show.
His voice overdubbed so many lines in old sci-fi movies that I recall seeing one film where an actor who didn’t resemble Frees in the slightest had been completely re-recorded by the versatile “Voice of God.”
Appearing on many imported Japanese monster movie soundtracks, Michael J. Schlesinger, in charge of writing and looping dialogue for the American version of GODZILLA 2000, actually inserted a bit of Frees’ voice in an unseen TV show in one scene of the film just for old times’ sake!
Besides Frees, Ohmart’s company has also done a biography of Walter Tetley, Jr. who played Sherman on ROCKY AND BULLWINKLE’s MR PEABODY segments.

Oh, and at the risk of sounding self-serving, Bear Manor Media will soon be publishing IT’S THAT TIME AGAIN 3, the latest in a series of fiction anthologies based on old-time radio series. This particular volume, edited by Jim Harmon, will contain amongst many worthier efforts no doubt, your humble Librarian’s short fictional debut! Here’s a link:http://bearmanormedia.bizland.com/id87.html
There will undoubtedly be more shameless plugs later on from where this one came.
Posted by Booksteve at 6:09 PM