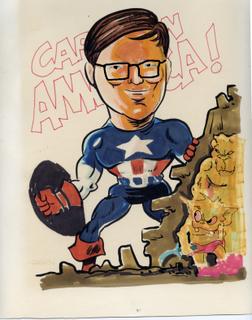 Alan Hanley was a very popular fan artist in the sixties and seventies, appearing in dozens of other people's fanzines as well as his own publications. I discovered and enjoyed his art when THE BUYERS GUIDE TO COMIC FANDOM (TBG, which eventually became CBG, COMICS BUYERS GUIDE) began regularly reprinting Hanley's GOODGUY strip, his unique, exciting but humorous version of a pre-DC CAPTAIN MARVEL revival. I began ordering other fanzines like THE COLLECTOR whenever they advertised work by Hanley also. (Later, when I realized I really had no room to horde the voluminous, weekly newspaper that TBG was at the time, I neatly clipped out all of Hanley's strips and they're filed away here somewhere.) Thus, around the time I graduated high school in 1977, when Mr. Hanley ran an ad offering caricatures of individuals as super-heroes (I forget the price) I was right there. You had to send in a recent photo and tell him which hero you wanted to be. As CAPTAIN AMERICA was even then my favorite (see earlier post) he was the natural choice. It didn't take long to recieve the picture and I loved it! It's long held a prominent place here at the Library and I was feeling nostalgic today so I thought I'd share it. I ordered another for my cousin (as Marv Wolfman's NOVA) and it, too, was a gem. Soon afterwards, though, TBG reported Hanley's death in, if I recall correctly, a traffic accident with a van. I was sadly unable to find any of his work on-line at all but it does still turn up from time to time in the nostalgic comics fanzines and books but he deserves better. He was a good artist, a funny storyteller and by all accounts, a goodguy himself. We remember ya, Mr. H. Thanks.

Oh, as much as I hated to do it, some of the darker colors, mostly the glasses, the eyes and the Wallace Wood-like creatures had faded drastically so I retouched them slightly (and not so neatly. Ugh!) for this appearance...on the SCAN, silly! Not the original!
Posted by Booksteve at 9:18 AM