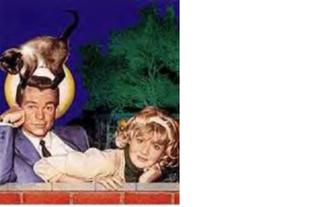 My pal Fred Hembeck apparently shared much of my early life...including my unrequited childhood crush on Disney Princess Hayley Mills, star of POLLYANNA, THE PARENT TRAP and, at left with Dean Jones, THAT DARN CAT. Here's Fred's piece at FredSez.
As for me, my crush on Hayley knew no bounds. A few years back when I was managing a bookstore, Ms. Mills was touring in THE KING AND I and I bought tickets for my lovely wife and myself. As the big day approached, I had the bright idea of having Hayley come in to my store for an hour to read Disney stories to kids in exchange for us displaying a poster of THE KING AND I for two weeks. I wrote her at the stop ahead of ours (a tactic that had worked for me in the past) but heard not a peep. In fact, as she hit town, she did so amidst reports that she was not happy with the play, her co-stars, etc. and, on the day BEFORE our tickets, she suddenly announced she was leaving the play! AARRGGHH!! Now, we still enjoyed the play (they brought in Faith Prince who had won the Tony for the Broadway revival a few years earlier. How could it NOT work?) but I've had a tough time enjoying Hayley as much since. Somehow, I'm convinced she did it because of me! Oh, Hayley, WHY!!?? Sigh.

On the plus side, when Hayley's THAT DARN CAT co-star Dean Jones came through town in SHOWBOAT, I went through the same routine to see if he'd read for us. He couldn't do it either but AT LEAST HE CALLED!!!! ARE YOU LISTENING HAYLEY?? DEAN JONES AT LEAST CALLED TO POLITELY DECLINE MY REQUEST!!!! AAARRGGHH!!!
Sniff. Sorry, everyone. Old flames....y'know. Thanks for listening. I'll be alright. Sigh.
Posted by Booksteve at 1:30 PM