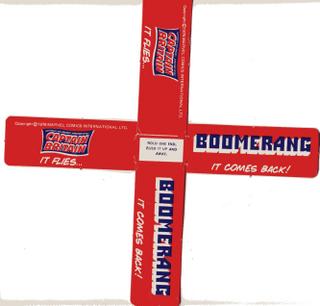 One of the coolest things about British magazines and comics is that they often come packaged with free gifts--toys, badges, sti 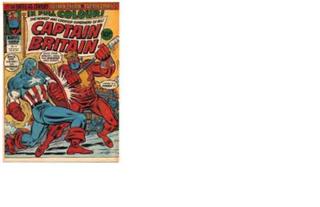 ckers, CD's, etc.
One issue of Marvel's published-only-in-the-UK (probably NOT the one pictured but I don't really recall) comic book offered this nifty boomerang that actually worked! Perhaps more interesting here, though is the brief instructive bit in the center. Ahem! Did you ever notice that most comics are lettered in all capital letters? According to legend, the word "FLICK" was banned from all DC comics for decades lest an ink smudge or a speck of pulp turn it into a more offensive vulgarism that would immediately corrupt young minds! But here...Ah, those crazy Englishmen!
Some coolness was present in these comics with scripts by Chris Claremont and art by Herb Trimpe, veteran Fred (AIRBOY) Kida and, later on the great AVENGERS team of John Buscema and Tom Palmer! One prolonged storyline had Captains Britain and America teaming to fight the Red Skull and terrorists with the help of Nick Fury! There must be some legal reason why Marvel hasn't collected these early CAPTAIN BRITAIN stories but I'm sure they will eventually. It won't be the same though. I'll miss the dirty boomerang.
Posted by Booksteve at 8:10 AM