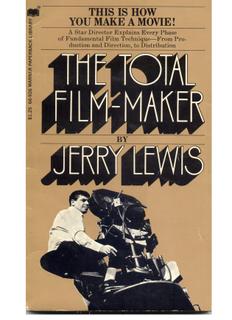 That's what we should call it. I mean, seriously, isn't "Labor" Day just a tad nebulous? Are we celebrating pregnant women? Some sort of Communist 5 year plan maybe? What exactly IS Labor Day other than an unofficial end to summer and the more or less official excuse to kick off the holiday season four months early? So why not call it Jerry's Weekend? Jerry Day, perhaps? For any of us who came of age in the seventies, it's always been the one weekend of the year you could count on seeing Jerry Lewis . Also, for many years Jerry presented some of the biggest performers as well as some of the best not-so-big performers. John Lennon appeared in the mid-seventies, Frank Sinatra and Sammy Davis, Jr. appeared regularly. Even estranged partner Dean Martin appeared on the Muscular Dystrophy Telethon in 1976!

Sure, it became so ubiquitous that it became a punchline. It also became quite controversial for playing on the public's guilt to raise its annual millions to fight Muscular Dystrophy. But that's never deterred Jerry. He knows he's the best and no one had better tell him different. In fact, Jerry's obnoxious egotist character in THE NUTTY PROFESSOR, Buddy Love, is reportedly much more like the real Jerry Lewis than his "Kid" character.

It was the Buddy Love Jerry, for example who wrote this book, THE TOTAL FILM-MAKER. Originally published in 1971 (pictured is the 1973 mass market paperback edition) the book is made up almost entirely of edited lectures from Jerry's tenure teaching film at USC. He comes across as an arrogant know-it-all but he does make some interesting points about directing, editing, dubbing and budgeting, among other topics.

Looking at Jerry's films as auteur, it's clear--even if you aren't French-- that he really does have talent. In fact, according to recent TV bios, he'd been directing no budget "home movies" for decades starring family and friends such as Janet Leigh. The problem seems to be that he was always full of himself and became fuller as time went on. When you think you can do no wrong and no one has the guts to tell you otherwise...well, look what happened to Elvis.

That said, I absolutely loved Jerry Lewis as I was growing up! From THE BELLBOY and CINDERFELLA to DON'T RAISE THE BRIDGE, LOWER THE RIVER and WHICH WAY TO THE FRONT?, Mr. L could do no wrong by me! I even followed Jerry's DC comic book which is probably more than Jerry himnself did! In the early seventies, he actually announced a grandiose plan to open a string of Jerry Lewis cinemas that would play only wholesome family films! Hey, I was about twelve. Sounded good. I looked for one to open near me for several years. Apparently a few DID open somewhere in the US but as business dwindled, I heard of at least one that was showing R-rated sex comedies like THE CHEERLEADERS. It's a shame. The whole idea probably would've been huge in France.

Interestingly enough as Jerry was throwing his career away by shooting the legendarily uncompleted drama, THE DAY THE CLOWN CRIED, I finally discovered that he had once been teamed with Dean Martin. Somehow, I'd missed that whole phase of his career! This revelation opened up a whole new group of Jerry films I'd never seen! I enjoyed watching them as they were revived regularly on seventies TV but Jerry, meanwhile, was reduced to badly edited, unfunny trash like HARDLY WORKING that was released in Europe a year or more before even finding an American distributor! Over the years, I also latched on to copies of Dean and Jerry's radio show and multiple TV appearances. He really was funny and they were a great team! 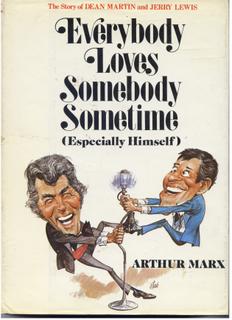 A year after Jerry's book went to paperback, Groucho Marx's son Arthur penned a sensationalized but mostly positive portrait of the Dean and Jerry team entitled EVERYBODY LOVES SOMEBODY SOMETIME (ESPECIALLY HIMSELF). It's been years since I've read it but as I recall, it doesn't spare the darker aspects of show business. Some were critical of Marx at the time but I still find it fascinating. It will be interesting to see how Jerry's own upcoming book, DEAN AND ME (A LOVE STORY) compares.

Dean and Jerry met a few more times after that '76 telethon. One such occasion was Dean's 72nd birthday in 1989 when Jerry walked in on Dean's Las Vegas stage act pushing a giant birthday cake and complaining about Dino's act going on too long. "Why we broke up, I'll never know," he was reported at the time to have said.

You really have to grant it to Jerry, though. Having made his first movie , MY FRIEND IRMA, in 1949, I have no doubt that even now, 56 frickin' years later(!), I will laugh at something Jerry Lewis says this weekend. After all it's Jerry's Weekend again. Labor Day is Jerry Day.
Posted by Booksteve at 5:50 PM