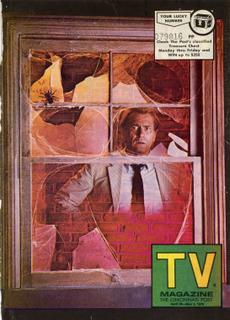 I am notoriously open-minded. Ask anyone. I welcome new things and one of my mottos has long been "All change has the potential for good." That said, who in their right mind could ever have possibly thought that pretty boy Irish actor Stuart Townsend would be the ideal person to play Carl Kolchak in the long-rumored series remake of THE NIGHT STALKER? Let's face it, people, someone missed the whole point of the series. The supernatural angle was just a mcguffin. Darren McGavin was the point of the series! Always a reliable actor, McGavin's intense, inspired, hammy but endearing portrayal of the ultimate cliched, disheveled, burnt-out reporter became the standout image of his career. He even carried some of the world-weariness into a long-running series of audio books as John D McDonald's Travis Mcgee (check your local library). On top of all that, he really knew how to wear a hat! I'd be surprised if Townsend even owns a hat.
Having watched several recent Sci-Fi channel marathons of the original 1974 TV series, I can say it was actually hit or miss. Some episodes were slow but some still quite chilling (Hey, my friend Bob Hastings is in the episode with the cruise ship werewolf! Cool!). But through all of them, Darren McGavin was pure pleasure.
Here's the link to the new version's Official Site:Nightstalker You decide whether you want to watch it. As for me, I'm really not saying it won't be good. I'm not pre-judging it in any way. I'm notoriously open-minded, remember? In fact, if it happens to be coming on and I happen to see that, I may try it. I'm just not going to bother seeking it out because they haven't shown me one reason to do so. They haven't shown me another Darren Mcgavin.
Posted by Booksteve at 3:23 PM