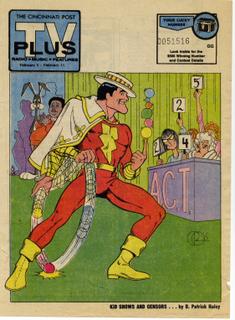 In yesterday's posting, I mentioned area cartoonists that were going to be at the public library. Well, one long gone cartoonist who used to be from the area is Daerick Gross (Sr.) who was an editorial cartoonist for the Cincinnati Post in the mid-seventies. Here's a link to his website, Studio G Homepage, where you can see some of his recent comics work. Pictured at left, however, is a rare early super-hero illustration from the cover of a February, 1977 issue of the Post's Saturday TV magazine. Considering the article topic (as well as the off-model caricatures of Bugs Bunny and Fat Albert in the background) I'd have to say that this was the TV version of Captain Marvel from Saturday morning's SHAZAM series but, hey! It's the Big Red Cheese! Gross also did a version of notorious baseball legend Pete Rose as a Captain Marvel-like hero that we still have somewhere in the vast library archives. It's interesting to note that most of his "real" comics work has been of the dark and brooding variety and yet his humor work while he was in town was outstanding and very unlike the editorial cartoonist clones who dotted the newspaper landscape back in the day.
Posted by Booksteve at 1:37 AM