My First Concert-Tony Orlando and Dawn 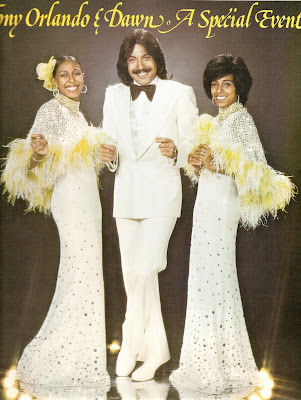 Earlier, in my Beverly Hills Supper Club post, I noted that "Wild Honey" reminded me of Dawn and that the event took place at the Riverfront Coliseum in Cincinnati. All of this got me thinking about the very first actual concert I ever saw which happened to be at that same venue about a year and a half earlier.

The Coliseum was new and I wanted to see what it was like. The first act I wanted to see was Sammy Davis, Jr in concert with Freddie Prinze as opening comedian. For reasons lost to time, that never happened. Instead I talked friend Terry (and his mom again) into attending Tony Orlando and Dawn's concert at the Coliseum in 1975.

In 1976, I was into the Beatles, Wings, the Monkees, the Moody Blues, and was just discovering FM radio. I loved AM pop though and Tony Orlando and Dawn had arrived in force with a string of big hits from "Candida" to "Knock Three Times" and the monster hit that was "Tie a Yellow Ribbon." Originally Tony with a couple of girl backup singers he had never even met, the records were first released under the group name of Dawn. Tony's charisma got his name up front quickly, though and luckily, when he met the girls, there was an amazing chemistry. Joyce Vincent Wilson and most especially Telma Hopkins were savvy, funny women who rode their success high as Orlando's million dollar smile lit their way.

Given their own TV variety show in 1974 (perhaps as a replacement for the now divorced and thus unfunny Sonny and Cher?), Tony and Telma each showed a marvelous flair for comedy and absolutely no lounge singer ever worked a crowd like Tony Orlando!

In early 1977, Freddie Prinze who had become quite friendly with Orlando after dozens of lookalike jokes brought them together, killed himself. Not long afterwards, Tony Orlando had a nervous breakdown on stage and the hit factory he headed slammed to a stop. Tony recovered and its still a treat (however infrequent) to see him today. Joyce went back to session work and eventually, I've heard, retired. Telma ("When I was a kid, mom told me to get the 'H' outa there!")reinvented herself as a popular comedic actress in sitcoms.