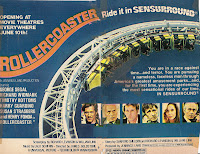 The low budget 1959 Vincent Price thriller, THE TINGLER featured showman producer William Castle’s notorious gimmick of having seats in the theater wired to give filmgoers an unexpected jump at certain moments during the picture. It was not a popular gimmick and by all accounts didn’t even work all that well.
In 1974, however, Universal Pictures decided to try it on a major scale with Sensurround. The picture was EARTHQUAKE, a by the numbers disaster flick featuring the genre’s demi-god, Charlton Heston along with an all-"star" cast that featured Marjoe Gortner, Ava Gardner, Victoria Principal and Richard Roundtree as Evel Knievel. Seeing this film in first run theaters was an experience. The Sensurround process depended on the theaters being rigged up with a sound system that caused the very theater to seem to shake at appropriate moments. It also gave the viewer quite the headache and, as I recall, a bit of nausea, too.
The latter was definitely emphasized for me on the second Sensurround feature, ROLLERCOASTER. Gimmicky though it may have been, this was a sharp mystery by COLUMBO’s Levinson and Link featuring George Segal (one of my favorite seventies leading men. What happened to his career anyway?) as the good guy and Timothy Bottoms as the bad guy. Henry Fonda was in there somewhere in one of those glorified cameos he did in between GAF commercials during that period. The shaking was well-timed but I HATE rollercoasters! I get motion sick if I turn around too fast!
MIDWAY came next, this time teaming Heston and Fonda with Robert Mitchum, Glenn Ford and even Japanese legend Toshiro Mifune…all of whom were pretty much left with glorified cameos that took a back seat to the spectacular wartime special effects. That’s where the Sensurround came in on this one, rumbling like planes and explosions throughout the meat of the picture. What a headache!
Sensurround’s final bow was with the theatrical release of TV’s BATTLESTAR GALACTICA pilot, re-edited and shown in theaters with an eye toward some of that STAR WARS money, Universal hedged its bets by throwing in its noisy, unpopular and even controversial gimmick. I’ll be honest, I barely recall it even being used on this one, however. It was certainly not used again, being retired to the status of trivia question. Four mediocre films…four headaches that lasted the rest of the day. Ugh!
Nowadays, of course, I'm reminded of this long ago gimmick every time I play video games with my son and lose because my controller abruptly rumbles in time with the on-screen action!
Posted by Booksteve at 9:41 PM